I prefer to have a plan, an idea of what I want to do before I go into a shoot.  The more specific, the better.  I like to get to know my subject, then draw up sketches of what I see for them.  I’m a big fan of pre-production despite how strange it feels to get the shots I want right off the bat after I’ve been planning for days.  It’s strange but rewarding.  I get the shot I went there for, then I’ve got the rest of the allotted time to play around; or if me or my subject has somewhere to be, we can get there.

Luckily for me, Nicole and Stephanie afforded me 5 hours of their time.  Special thanks to The Cellar Dwellers for use of their theater for this shoot.

I don’t know why, but for Nicole, I had a vision for a bare head-and-shoulders shot; head tilted back and a perfect sphere of water falling above her.  White background.

In earlier takes that I’ve deleted, the background ended up being too bright and the water drop less visible than I liked, so I moved everything a few more feet away from the background to pull light from it and make it recede a little more.  I was also blasting her from the left and the right with a couple of wireless flashes and transparent umbrellas.  I was going for a sort of make-up ad look where everything is lit and white and clean looking.  But then one flash took a little longer to recycle and I took a shot containing strong shadows and richer color.  I liked it.  I stuck with it for the remainder of the takes. 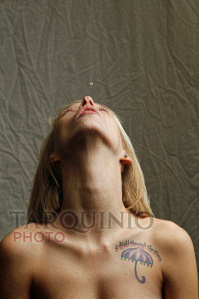 This is not the final image.  Due to the imperfect nature of trying to freeze a drop of water in the air at just the right moment, the final ended up being a combination of this one and another.  You see how she’s not perfectly centered and not quite perfectly under the water drop?  I didn’t like that.  But this gives you an idea of where I’m going.  More on this shot later.

Another shot I wanted was a soft, natural, pretty, behind-the-shoulder job… 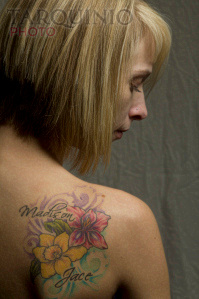 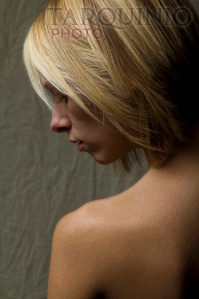 We did one on each shoulder and lit them each the same way.  My original intent was an emphasis on form.  The tattoo changes the focus and thus the intent.  It would be like if I had intended to take a photo of a snow covered fence and a cardinal got in there at the last second.  It wasn’t my intention, but it’s not wrong.  It has become another kind of beautiful.  And it works just fine as a simple portrait in my opinion.

The photo on the right was exactly everything I intended it to be.  Great form, soft skin contrasting with the background.  I softened her edges a little bit too to enhance that feeling of softness.

Stephanie was a great example of why I prefer to meet my subjects before I shoot them.  I knew she was a brunette and I was happy about that because there was a particular shot I wanted to try.

This was pretty close to what I wanted… 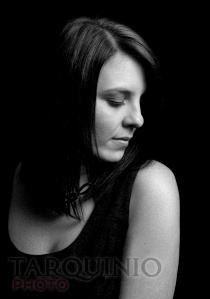 Moody.  Contrasty.  A little dodging to make those highlights in the hair and on the face pop a bit more.

Then we moved backstage for another particular shot I wanted. 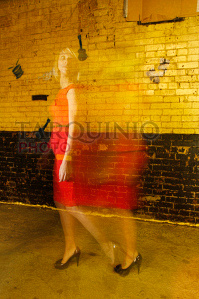 (See my article on delayed flash to see how I did this one.)  Neither this nor any of the shots I took back there were quite on the nose of what I wanted.  I had hoped to be able to paint the ghost streak behind her green with the use of a work light with a green gel over it.  It wasn’t strong enough though.  We didn’t have much lateral leeway and that guitar on the wall kept getting stuck in her head.  The above shot got the boot because I wasn’t happy only being able to see half her face and I was hoping to get a little more of the cigarette in her right hand.

As I got nothing I wanted in the color versions of this shot and it was looking considerably creepy, I decided to take it all the way to Creepyphotoville. 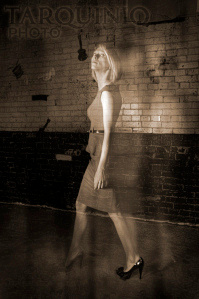 Turned it monochrome, tinted it sepia, then I applied a blurred out texture over top of it to give it the appearance of water damage or something like that.  I think I burned the edges and corners as well.  This actually ended up being the last shot of the day.

We took these other two for the heck of it… 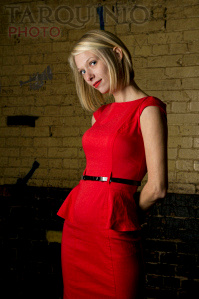 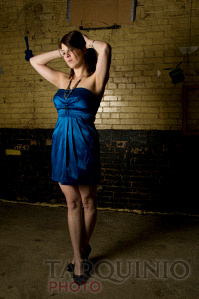 Remember that water drop picture from the top?  The one I wanted most of all.  Well I composited two images to get this…

…but it still didn’t feel like it was finished.

I’ve been looking at a lot of wet plate photography lately so I decided to give it a sort of simulated wet plate look.  The result was… 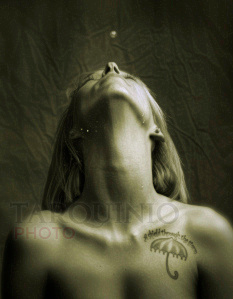 …my favorite shot of the day.