When it comes to musicians, I love a shutter drag once in a while.

Dragging the shutter technically means adjusting the shutter speed for your ambient exposure while letting your flash take care of your subject.  Long winded explanation with pictures here.

To me, it means motion and ghostly effects. 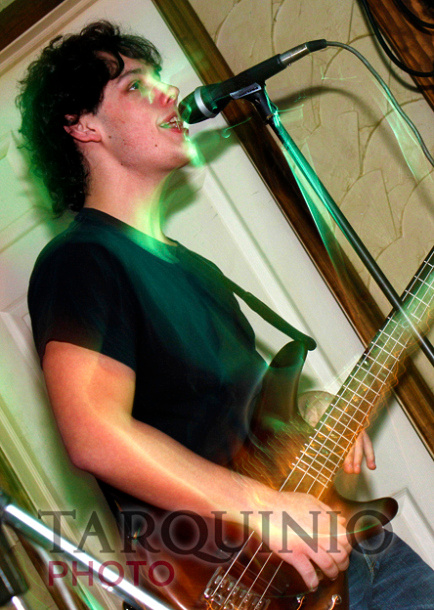 Speaking of using flash on musicians, I’ve been told that’s a photo faux pas in live situations.  I say nonsense if you’ve got the band’s permission and nobody else complains.  The photographer’s job is to create great images.  If he can create great images with a flash, a flashlight, a lantern, a turkey baster, or whatever and nobody objects, there’s no reason for him not to. 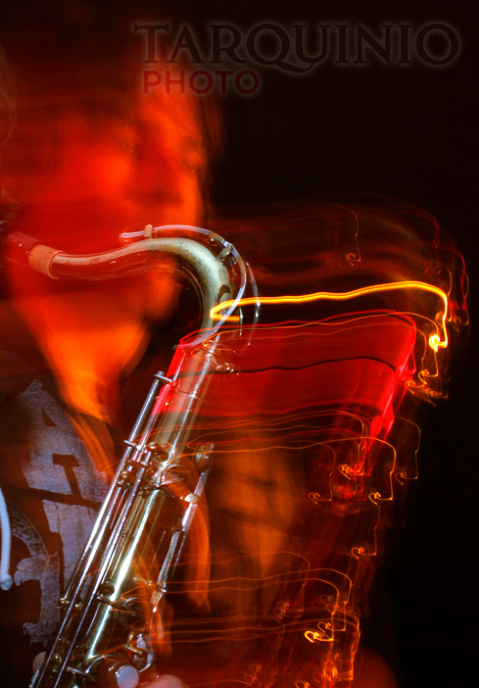 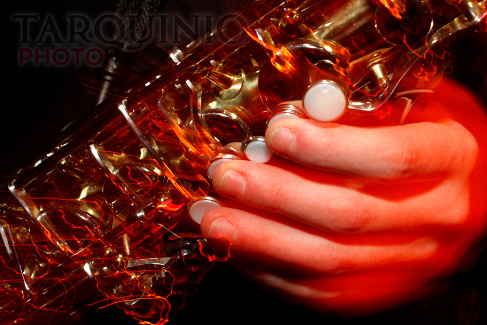 I did these photos with a red-gelled work light and a rear curtain flash.  The one above is cropped down.  The original contained his actual face and hand and a little more of the sax.  Didn’t look as cool though.  The “real” elements of the picture ended up distracting from the intent and kind of made it look like a mess.  It was too much, so I cropped it to emphasize the “ghost” and left enough of the neck of the sax in to make the viewer take a second or two to get her bearings and look harder.

The lower picture required several takes at different shutter speeds just to get the squiggles at a good length that they weren’t too short (and looking like a mistake) or too long (looking like a mess).

Finally, probably my favorite picture in which I’ve ever used a dragged shutter… This is a picture of a drummer by the name of Josh Revels from the band Chaos Killed at a performance at The Fallout Shelter.  (Enough prepositional phrases for ya?)

This picture was also a happy accident.  I remember when I took this I had forgotten the shutter was set to stay open for a second or so.  I think I was excited because I knew as soon as I pushed the button I had the shot.  Forgetting the shutter was still open, I brought my camera down to look at the image and it created all those beautiful streaks.

This was around the time I discovered the HDR Toning feature in Photoshop and I used it to add contrast, saturation and just a surreal feel and I believe it captures the band’s feel very well.

Now I’ve been told that the HDR toning looks cheesy.  I’ve also been told, “This is my favorite picture of me.”  (It’s one of my favorites too.)  Hey, either way, I’ve still got the raw file.