Give the client what he or she wants.

That is probably my number 1 rule.  If it isn’t, it’s certainly in the top 5.  The client is the one writing the check and a professional photographer isn’t as cheap as Sears or J.C. Penney’s.  If the client has gone to a professional, he isn’t likely looking for an 8×10 of him sitting in front of a cookie cutter background and looking at something hilarious that happened just off camera.  But will I turn him away if that’s what he wants?  Absolutely not.

“Well if all I want is just a nice shot of me looking nice and smiling at something just off camera, why should I pay you $X when I can get it at the department store for $x?”

Lots of reasons.  The first is that the department store can’t come to you.  Nor can it go to your favorite place or any other setting that truly represents you.  The second is time.  The reason department stores are able to charge so little is the turnover rate.  The 16-year-old running the mostly computer controlled camera is only permitted to take a certain amount of pictures from which you can choose the best one(s).  Might not be a problem for most adults but what if your 6-month-old decided not to sleep last night?  What if you walk past the toy store on the way in and end up in tantrumville?  What if the boys don’t stop fighting or the girls keep pulling hair?

The third reason is impersonality.  People in department store photos are rarely themselves.  The photos are of their faces and their smiles but not of themselves.  I can’t speak for every photographer but my goal is to show who you are; and I think you’ll find that when the soul is captured, the beauty follows.  People are beautiful in different ways and so ideally no two portraits should be the same (not just in regards to the background); but if you come to me and I take a soul-bearing picture of you and you’d still rather just have a shot of you sitting awkwardly on a stool in front of a cloth, smiling at something just off camera, in your Sunday best.

Case in point, my friend Dave. 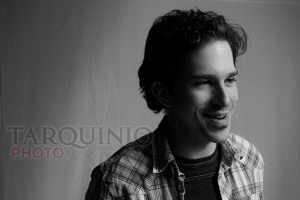 Dave’s an amazing musician, plays a million different instruments, writes songs with lyrics too far out to be understood by mere humans.  He asked me to do some promo pictures for him.  Of course he had his ideas in mind, but as I did this shoot in exchange for lunch, I subjected him to my whims to start.

I felt the fact that he’s a musician and fellow artist afforded me a lot of artistic breathing room which I intended to take full advantage of.  My concept was that of some sort of multi-armed musical buddah. 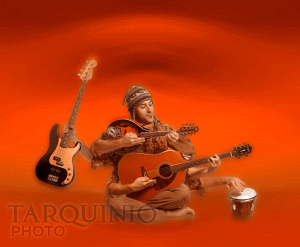 I was pretty happy with it.  Not 100% but I hey I did all the editing on a laptop’s touchpad so I think that’s saying something.  It got a lot of likes and comments on facebook.  But of all the pictures of him I took that day, it did not make his cut when he put his music page(s) together.

Neither did this one… 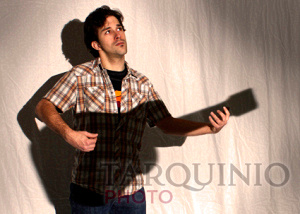 Yeah that’s right.  He’s playing a shadow guitar.  It took a fair amount of planning and tweaking to get it just right and the only shot I ended up being able to work this image from is the behind-the-scenes one I took so that I could show people how we did it. 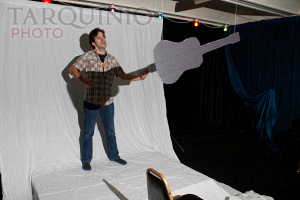 Hence why it looks so low-fi.  The finished image was not what he wanted either.

Would I normally spend this much time and effort for two shots a client didn’t want in the first place?  Absolutely not.  As I said, this shoot was as much for me as it was for him.

Finally, we got to what he wanted to do, which was simply full length shots of him just playing guitar… in a button down shirt and a tie.  Attire that I didn’t think fit him, personality-wise.  Maybe that was his point though.  After the shooting-for-post shots though, everything else was almost too easy. 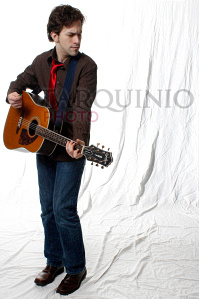 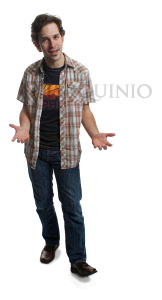 He looks good.  No doubt.  Didn’t feel like him to me at the time though.  He used the one on the left I remember for sure.  If he didn’t use the one on the right he used the other, less dynamic one from that series.

…caused by him stepping too far back and being in the light I was using to blow out the background.  Taken in color originally, I decided to play with it and came up with this.  He liked it.  He used it.

On a related note, I once did a video job with a very experienced lighting guy.  I watched him intently all day to try to learn something.  But he didn’t talk much and it took the better part of the day for me to figure out how to ask him about what he does without the question sounding dumb.

We finally came to the last location.  He lit it, the director/camera op started doing his thing and I asked, “So, is there like a philosophy or a way you go about lighting a scene?”

He stuck his bottom lip out, shook his head and said, “Just whatever looks good, man.”

I try to remember that advice when I start worrying about the complexity of a shoot or when I’m trying too hard to find something more in something that’s already great.  I also allow myself to remember that advice when I read snooty articles or comments from professionals that say, “If you’re not using (fill in the ridiculously expensive piece of gear) then you’re not a real photographer.”

Look at my portfolio, if you like what you see, hire me.  If you don’t see what you’re looking for, ask me if I can do it and I’ll tell you.  If I don’t have the proof I can do what you want, you’ll get it at a discount.