Drew’s a local musician working hard to make a career out of it.  He’s also my friend.  He’ll be getting his website up and running soon so he’s asked me to make him look pretty.

I relish the opportunity to work with musicians because it opens up a lot of creative possibilities for the images.  As I’ve said before, it is my mission to bring out who and what a person is in his or her images.  With artists, I get the opportunity to interpret their messages and convey the feelings of their art in mine.

And I have to tell you it irks me to no end when I see photographs of artists that convey nothing but what they look like.  Environments chosen simply because they look good.  Sure the images look beautiful.  But how often do you see a rock guitarist hanging out on a wooden bridge over a creek with sunlight playing through the emerald leaves?  The answer is – only when he’s getting his picture taken.  It’s not real.  It has no soul.  The photographer might as well tell him to say cheese before he takes his picture.

Case in point, Drew writes and records pop music.  That’s reason number one I chose the city instead of the forest to shoot him.  Pop music is dance music is club music is city music.  Reason number 2 is because everything in the forest is dead and none of his songs take place in or have imagery of it.

His songs do speak of flirtations, loves, and longings and those are some of the fundamental ideas that shaped my shoot.  As he wanted a good deal of closeups we were going to have to do much of that in the face. 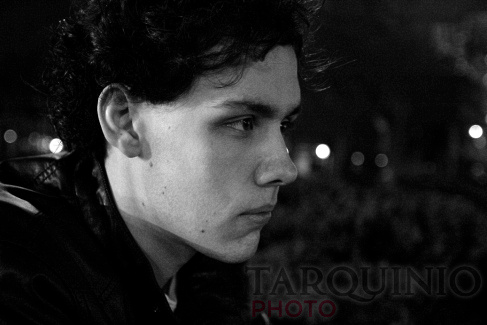 But nobody can be serious all the time.  If you don’t break up heaviness or darkness with lightness, the gravity lightens up by itself.  It’s one of the reasons soap operas are funny.  It’s why you laugh at the picture of that drummer you know because he’s always laughing when you’re hanging out but trying to look like a badass in the picture.  It doesn’t work.  It’s OK to be a musician AND smile.  Have fun and your audience will too.  (That applies on stage too.) Speaking of gravity, Drew, in one song, references gravity being unable to hold him down and if you want to see him, “just look to the sky.” Wait’ll you see what I do for his work in progress Colors.